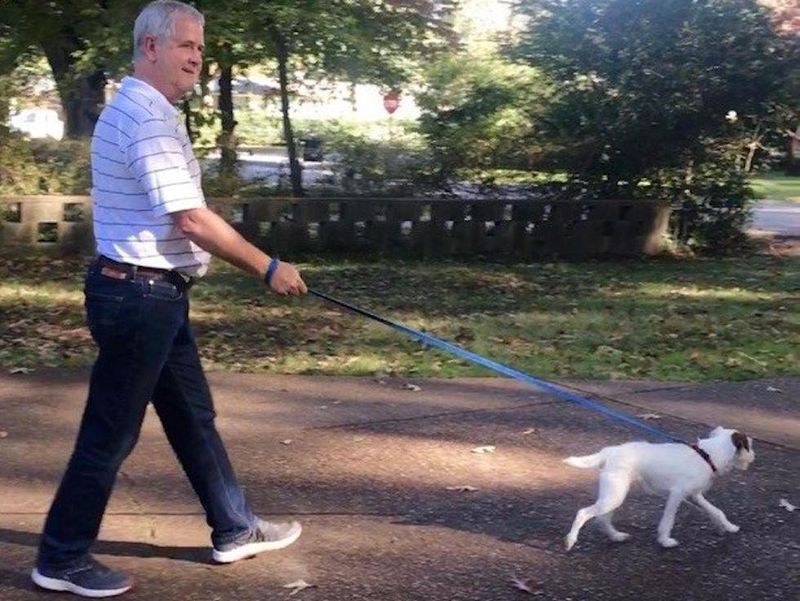 When Tommy Van Brocklin signed up for a trial of a special type of magnetic brain stimulation therapy that could potentially ease his depression, he had already been living with the mood disorder for 45 years.

Van Brocklin, 60, first underwent an MRI that located the part of his brain that regulates executive functions such as problem-solving and inhibits unwanted responses.

Then for five days, for 10-minute sessions 10 times each day, doctors used repeated pulses to stimulate the part of his brain that could impact his depression.

While at first Van Brocklin noticed no change, by day two he felt emotional and by day three he could tell it was working in a way that medications and talk therapy no longer did for him.

"The third day, I guess it kicked into gear, and I started to get better and better and better," Van Brocklin said. "The treatment seems to show me that there is enjoyment in everyday things, the small things, like walking my dog just for the enjoyment of it, or playing my guitar for the fun of it."

The treatment, called SAINT, is an intensive, individualized form of transcranial magnetic stimulation (TMS). In the new trial, researchers worked with 29 individuals who had severe depression that was resistant to other treatments. About half of the participants received SAINT. The other half had a placebo that was meant to mimic the real treatment with a magnetic coil that felt like a magnetic pulse

The relief came quickly, within days, and was successful for 78.6% of the treatment group. They were found to be no longer depressed in standard evaluations. Side effects were temporary fatigue and headaches.

Study author Dr. Nolan Williams, an assistant professor in the Department of Psychiatry at Stanford University, was motivated to provide a quicker solution for people who had psychiatric emergencies. The solution would also be an alternative to electroconvulsive therapy, which is used by only about 1.5% of people to treat a suicidal depressive episode for a variety of reasons, he said.

"The vast majority of people who come in with suicidal depression in the United States, into U.S. psychiatric hospitals, don't have access to any sort of emergency intervention. That's coupled with the other data that suggests or demonstrates that people who are in these sort of suicidal depressive episodes have the highest lifetime risk of completing a suicide attempt after they get discharged from their first inpatient hospital stay for a mood disorder," Williams said. "The No. 1 risk for suicide is previous suicide attempt. The No. 2 risk for suicide is hospitalization prior to that attempt."

Williams said he became convinced that something like this was needed. TMS in its current, U.S. Food and Drug Administration-approved form works over a longer period of time, about six weeks, so it is not as useful to someone who will only be an inpatient on a suicide hold for about 10 days. SAINT works more quickly. About half the patients who have standard TMS improve, and one-third experience remission from depression.

"We figured out a way to compress an entire six-week course of TMS into a single day. And so then we're able to give five times as much stimulation, and there's a bunch of new neuroscience, basically, in how to rearrange those pulses in time and in space," Williams explained.

The patients in the study ranged from 22 to 80, with an average of nine years of depression. They had tried medications, which either had no effect or had stopped working over time.

"To have something that can work very fast and can last for some people years, some people months, it's a pretty big jump as far as having some important tools in the tool belt for treating depression," Williams said.

Compared to the conventional TMS treatment, this is also more individualized because of the MRI.

"I think why this is working so much better is we're able to give [a] dose that's enough for that individual and we're able to do it in a personalized way," Williams said.

"If you can maintain this, it can put people back to work, it can get people back on track. They finally have the life that they want, so it can be a very dramatic improvement for folks if they can kind of get out of that mood episode," Williams said. "That's what we've seen with folks is that they're just kind of categorically in a better spot."

Van Brocklin's sister, who lives in California, had suggested the trial. Van Brocklin, who lives in Tennessee, said he is working now to remember he's on a mission to stay well and giving up habits that were not working for him.

"I'm feeling good. It's definitely stayed with me. It didn't just vanish away," said Van Brocklin, who had the treatment in early September.

The findings were published Oct. 29 in the American Journal of Psychiatry.

Dr. Mark George, known as a TMS pioneer for his work on the FDA-approved version of the treatment, reacted to the findings with enthusiasm.

"Although the treatment itself is great, really very few side effects, there are no drug interactions, no cognitive side effects, no IVs; the biggest drawback has really been the time intensiveness of it. It just took a lot of chair time to get people well," George said about conventional TMS. "And because it took a lot of chair time, it was pretty expensive or you can only treat so many patients in a day. ... That's been one of the things that's kind of held it back from being more useful.

"This study is massively important because it shows convincingly, really without any doubt, that you can do what we used to do in six weeks, bigger, faster, better in a week," continued George, who is the Layton McCurdy Endowed Chair in Psychiatry at the Medical University of South Carolina.

These results are important because of the really high response and remission rates, he said.

"Suicide rates in the United States have climbed year over year without really slowing down, even though we have widely available medications, and so having a tool that can quickly get people [out of suicidal thinking] would be very, very effective," George said.

"As … somebody who started this many, many years ago, it is really gratifying to see how, over time, hardworking doctors and scientists and patients who agree to be in these studies and work together to refine an entirely new way of treating illnesses in the brain and, with some clever thought and changes and then funding, really make breakthroughs," George said.

The U.S. Substance Abuse and Mental Health Services Administration offers a national helpline for people with depression and other mood disorders.