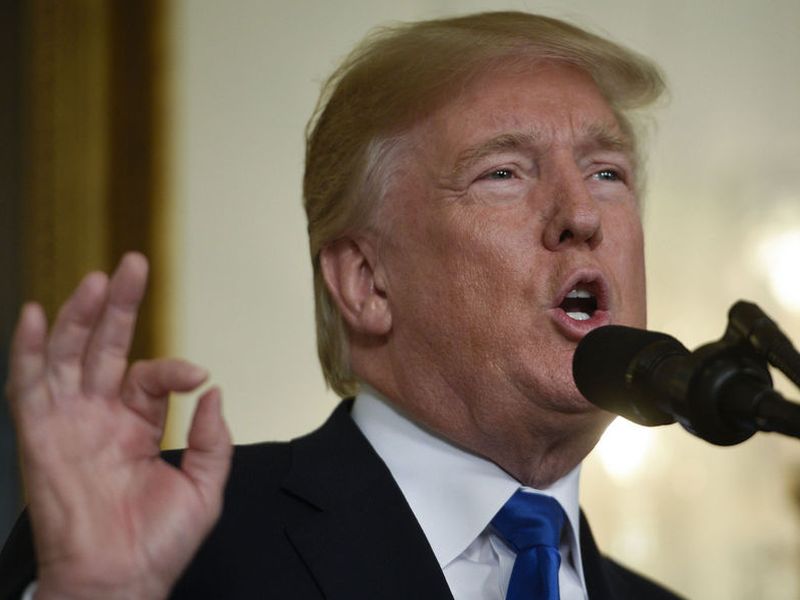 Trump Released From Hospital After 3 Days of COVID Treatment

After being treated for COVID-19 at Walter Reed National Military Medical Center for three days, President Donald Trump was released from the hospital Monday evening.

Earlier in the day, he tweeted about his impending discharge, saying, "I will be leaving the great Walter Reed Medical Center today at 6:30 P.M. Feeling really good! …"

Trump's medical team delivered an update on his condition Monday afternoon, saying he would receive his fifth and final dose of the antiviral drug remdesivir at the White House tomorrow. His physician, Dr. Sean Conley, noted that Trump hasn't had a fever in 72 hours.

Conley confirmed that Trump would return to the White House after having spent three nights at Walter Reed, although he was not "out of the woods yet" in his fight against COVID-19. "Over the past 24 hours, the president has continued to improve," Conley told reporters during a media briefing. "He's met or exceeded all standard hospital discharge criteria."

Notably, Conley evaded some key questions about the president's condition, including his lung function and the date of his last negative coronavirus test. Trump's doctors did say he has continued to take dexamethasone, a steroid that has been shown to be beneficial to patients who are very sick with COVID-19.

Some medical experts said Monday that Trump should be closely watched for at least the first week of his infection, given that some patients quickly deteriorate several days into their illness, The New York Times reported.

"I think it would be disastrous to be in a situation where he gets really sick at the White House, and you're having to emergency transfer him," Dr. Celine Gounder, a clinical assistant professor of medicine and infectious diseases at the NYU Grossman School of Medicine, told the newspaper. "To me, it's not safe."

Gounder also noted that dexamethasone can cause a false sense of euphoria. "A lot of people will just feel really great. If you had any aches and pains, they will disappear. If you had a fever, that will disappear," she explained. "People can become somewhat manic, grandiose."

As the drama around his treatment and handling of the coronavirus pandemic has continued to swirl, Trump has been eager to leave the hospital as soon as possible, the Times reported.

Based on his doctors' earlier accounts, Trump's symptoms quickly escalated after he announced early Friday morning that he had tested positive for the coronavirus. He was first taken to Walter Reed Friday evening.

Trump experienced a "high fever" on Friday, and there were two occasions when his blood oxygen levels dropped, on Friday and again on Saturday, the Times reported. Trump's oxygen saturation level was 93% at one point, his doctors said. Ninety-five percent is considered the lower limit of the normal range.

Many medical experts consider patients to have severe COVID-19 if their oxygen levels drop below 94%, the Times reported. Trump was given supplemental oxygen on Friday and Saturday, Conley said Monday.

In addition to being given an experimental antibody cocktail and remdesivir on Friday, Conley said Trump was first given dexamethasone on Saturday.

It was not clear whether the doctors had given Trump dexamethasone too quickly, experts in infectious disease and emergency medicine said Sunday.

"The dexamethasone is the most mystifying of the drugs we're seeing him being given at this point," Dr. Thomas McGinn, the physician-in-chief at Northwell Health, the largest health care provider in New York state, told the Times. The drug is normally not used unless the patient's condition seems to be deteriorating, he added.

"Suddenly, they're throwing the kitchen sink at him," McGinn said. "It raises the question: Is he sicker than we're hearing, or are they being overly aggressive because he is the president, in a way that could be potentially harmful?"

While Trump's age, weight and gender automatically put him in a high-risk category, he will have the best medical care available, the Times said.

Many Midwestern states are seeing some of the nation's highest per capita rates of infection, and while federal health officials have again urged some governors in the region to require masks statewide, some Republican governors have resisted, the Associated Press reported.

Wisconsin appeared to be in the worst shape: A record number of people with COVID-19 have been hospitalized in that state, the AP reported.

"Over the course of the past two to three weeks we have noticed a marked rise in COVID patients coming into our hospitals in Green Bay," Dr. Paul Casey, medical director of the emergency department at Bellin Hospital in Wisconsin, told CNN. "And this comes in the wake of what we thought we were doing well."

"For the first time in 17 years that I've been here, we've had to put patients in hallway beds," Casey told CNN. "I never envisioned having to do that in a small community like Green Bay."

In North Dakota, hospitals are adding extra space amid worries about capacity, the AP reported. About 700 COVID-19 infections per 100,000 people have been diagnosed over the past two weeks, leading the country for new cases per capita, according to the COVID Tracking Project.

The surge has been seen throughout the Midwest. Iowa also reported a spike in people hospitalized with the virus, the AP reported. Last week, the state had the nation's sixth-highest rate of coronavirus infections per 100,000 people, according to a recent White House coronavirus task force report. It again recommended Iowa require masks statewide, which Republican Gov. Kim Reynolds has said is unnecessary.

The Midwest has now overtaken the South for the country's highest seven-day average of new daily cases per 1 million residents, CNN reported.

By Monday, the U.S. coronavirus case count passed 7.4 million while the death toll passed 209,600, according to a Times tally.

By Monday, India's coronavirus case count passed 6.6 million, just over one month after hitting the 3 million mark, the Times reported.

More than 102,600 coronavirus patients have died in India, according to the Hopkins tally, but when measured as a proportion of the population, the country has had far fewer deaths than many others. Doctors say this reflects India's younger and leaner population.

Meanwhile, Brazil passed 4.9 million cases and over 146,000 deaths as of Monday, the Hopkins tally showed.

Cases are also spiking in Russia: The country's coronavirus case count has passed 1.2 million. As of Monday, the reported death toll in Russia was over 21,000, the Hopkins tally showed.

Worldwide, the number of reported infections passed 35.2 million on Monday, with over 1 million deaths, according to the Hopkins tally.