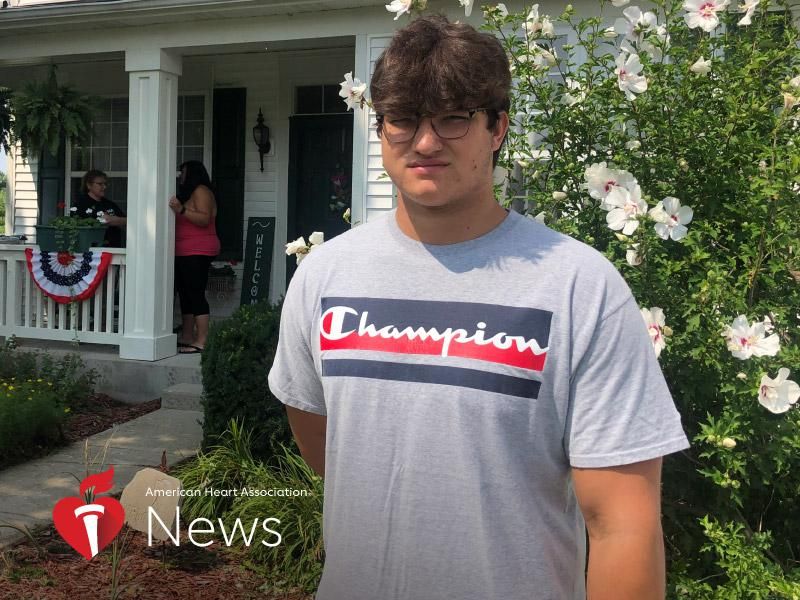 On a morning this past February, 16-year-old Carson Cathey got up, went downstairs and scarfed down a donut and glass of milk. His father, Patrick, also was awake, and they had a conversation before Carson decided to return to bed.

About two hours later, Patrick heard a thud. He found Carson -- a 6-foot-4, 282-pound defensive lineman at Oswego High School in Illinois -- lying on his bedroom floor, unable to move the left side of his body.

Paramedics took Carson to a suburban hospital. An emergency medicine physician recognized the signs of a stroke, even though it's unusual for someone Carson's age.

Doctors consulted a stroke specialist at Rush University Medical Center in Chicago via video. They determined Carson had an ischemic stroke, which occurs when a blood clot blocks a blood vessel in the brain.

It was just after noon. The fact that Patrick saw Carson earlier that morning gave doctors a crucial piece of information: He was still within the four-hour window to receive a clot-busting drug that could reduce the damage caused by the stroke.

The medical team moved on to the next question: Why did this happen to a teenager, especially one who seemed otherwise healthy?

Doctors typically first check a patient's heart when there is no known cause. The first tests found nothing unusual. The cardiologist treating him consulted with Dr. Joshua Murphy, the head of pediatric cardiology at Rush University Medical Center.

Murphy had told Carson the problem likely was a hole between the two upper chambers of his heart.

The first test was inconclusive. Round two showed Carson indeed had what Murphy predicted, a hole known as a patent foramen ovale, or PFO.

Carson went home, then returned about a month later for Murphy to close the hole. Murphy was very familiar with this routine. He had the same procedure to close a PFO after having a stroke at age 37 while he was on his pediatric cardiology fellowship at Yale in 2007.

About two weeks after surgery, Carson started working out again.

Because of the COVID-19 pandemic, his high school football team didn't play last fall. When the delayed season began on March 19, Carson didn't play. But he returned the next week. He even led the team onto the field, carrying the U.S. flag at the front of the pack. By late April, he'd recovered enough to play the entire final two games.

"Everyone that works in pediatric cardiology is often amazed at how well kids do and how they bounce back," Murphy said.

Over the summer, Carson was back to attending football camps. Now a senior, he hopes to earn a scholarship to play college football. He's still playing defensive tackle, and seeing action on offense at left tackle, the spot usually manned by a team's best offensive lineman.

Neither the stroke nor the PFO have left any lingering physical issues. Still, the ordeal changed him. His family created T-shirts with Carson's name and the words "Built Different" on the chest. That phrase has motivated him through his recovery.

"I like telling this story to show that there's hope, to tell everybody that if I can do it, you can do it too," Carson said. "Just keep going, keep pushing. Just never give up."